*Laney is a fictional character, however, all the details of this story are compiled from the real-life events of the women Peace Promise serves.

My Name is Laney.

I want to tell you my story.

I need someone to listen.

I need to find HOPE and I think you might be able to help me. 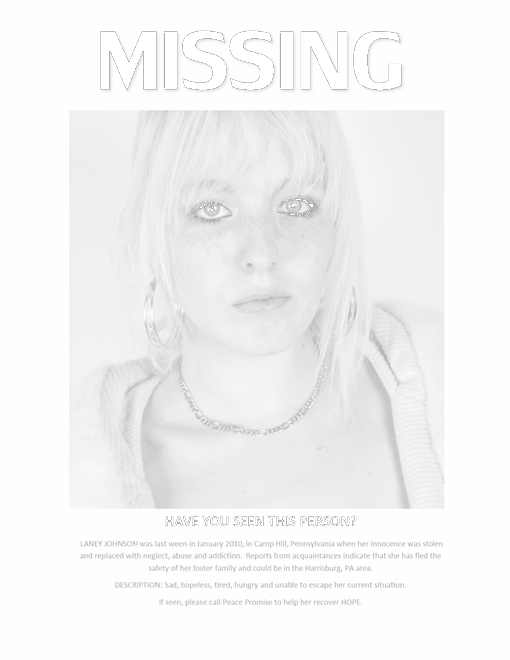 Uncle Nick told me I would never amount to anything and I think I’m starting to believe him. He is the seventh uncle that mom has brought home to stay with us. I was nine-years-old when he started hanging around our house. At first, I liked having him here. Uncle Nick really spoiled me and my brother. Then, two years later, Uncle Nick lost his job and started drinking and partying every day. The parties were too much for my brother, so he moved out and went to live with his dad. I never met my dad. So, I stayed with my mom. It’s not bad. Mom sleeps all day and lets me do whatever I want. The parties at our house are loud. I don’t like it when Uncle Nick drinks too much. When he’s not drunk, he looks out for me. He makes sure I have something to eat for dinner and we watch movies together. When he’s drunk...he acts weird. He sits too close to me and tells me I’m special and that he loves me. I guess I shouldn’t have said that I’m supposed to keep that and the other stuff he does a secret.

Then, mom and Uncle Nick got into a big fight because mom lost our rent money at the casino. Uncle Nick told mom she had to find a way to pay the rent, but she didn’t have a job. Luckily, Uncle Nick had friends that would give us the money. All mom had to do was spend time alone with Uncle Nick’s friends. I stayed in my room when his friends came over.

We had enough rent money for a while. Then Uncle Nick lost his disability benefits. Mom and Uncle Nick fought all the time about money. I hated hearing them yell. Mom was tired of Uncle Nick’s friends coming over to see her. Uncle Nick said that was fine because his friends wondered if I was interested in partying. Not a chance! Every time they came over, I locked my door. They laughed too loud about things I didn’t understand and I could hear them teasing my mom. Even when she cried, they didn’t stop laughing. I didn’t like them.